Home    News    Charity in the world    Winter will be long: the Amur homeless looking for where to survive the cold

Winter will be long: the Amur homeless looking for where to survive the cold

Charity in the world
8 years ago 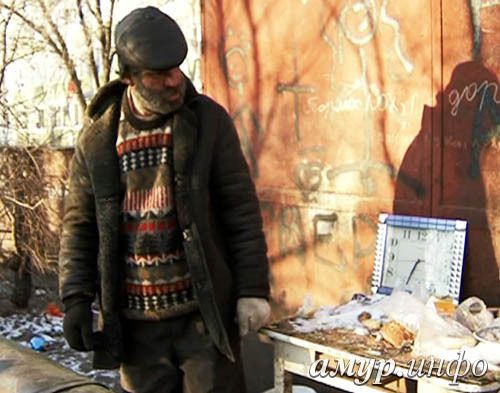 Share on Facebook
Share on VK
The ensuing cold complicated the lives of the Annunciation homeless . At present , it is estimated , in the city of about 100 people. They have to look for, where to winter . Often vagrants sleep in the sewers of heating networks or go to a rehabilitation items , which several of the area. Typically , visitors do not stay long: freedom beckons .
Now homeless , and last builder and mechanic Intiqam Mamedov third year wintering in the reservoir. Mamedov story on "Alpha Channel" discussed almost a year ago , in the " Open" . "In three years tubbolnitse lying , and then cured, then I can not work . He worked a lot, but now I can not - do not have enough breath , " - says the homeless . The man was born in Baku . In the 80's the family left there and went to the Amur region . In Blagoveshchensk their homes had never been . Passport , said lost during the Soviet era . Now Mamedov need help physicians. " The legs are denied at all ", - complains Intiqam . The last time he washed in the past year. It feeds than is necessary, preparing a meal on a fire , the water takes from the column. In recent days Intiqam hard freezes . Where once the assistance of social service center , he refused , but now says , is willing to go where the heat.
Attach tramps want somewhere warm and residents of local five-story building . In the area of ​​convoys -1275 live three more homeless , including women . "Their pity, some measures should be taken . Previously, there lived a homeless person . For two homeless died - the police came , took out the bodies. A three- year Intiqam lives here . This year, all around the city are homeless . And they are here , and drink , and eat , and toilet - all of them here , "- said Elena Loy , a resident of house number 194 on the street working .
Typical reasons why people end up on the street - the loss of documents , cheated realtors kicked relatives out of jail , drunk . With the onset of cold weather for the help homeless people turn to 1.5-2 times more often. The closest point to Blagoveshchensk to help such people is in the Garden , it oversees the Orthodox diocese . In a small house live both men and women . Some work , and the rest live off donations. They bring food and clothing and lack of furniture and household appliances. " Then what are the rules of conduct : no alcohol , no gulyanok . If caught , then for the first time forgive , forgive the second , and the third will say, " Get your things and goodbye '" - sums up the point postoyalitsey homeless Village Garden Angelica Pirozhnikova .
Currently in the Garden , in paragraph homeless at the Annunciation diocese, 11 people live . They are ready to take two more people homeless . From amurchanam willing to help in difficult situations, in paragraph take care products , clothing , furniture and appliances.
On the point of care collaborating center "Kindness ." Social workers help the beggars recover documents , obtain a pension , disability, to get to the orphanage , get treatment , to earn some money . A couple of days ago, employees of " Compassion " was brought to the point of care blagoveschentsa Yuri Drokova . He is partially paralyzed arm , but the man hoping to find a job. In the street he was once released from prison. Paralyzed arm , explains Jury , " on the nervous system ": " Because of the head. I was lying in the nerve surgery , an operation I did . I lived in the country . There was a stove. Fouling me there all my documents were burned. And that's what gave me - Yuri shows a wound. - I was almost killed . "
The system using the Amur homeless there are gaps and problems that so far none of the officials have not decided. It is still unclear where vagrants wash before giving them a temporary roof over their heads. Bani did not always agree to provide services to the homeless. "Yesterday there was a guy - not to say that inveterate homeless . But here we get it right on the first day could not : he has a lot of lice. Run it into the house just is not possible because all will be infected . A place where he could change clothes , change s , wash and sent here , no " , - says the curator of the item to help homeless Vitaly Mikhailov .
That Blagoveshchensk need rehabilitation center for the homeless , they say the first year. When you see such an institution - an open question . However, even with its appearance will not help everyone. "There is no rehabilitation center, which should be just like a hospital . And the law must be provided that it should not be voluntary. People are at a stage in their life that they are the word " voluntary " do not understand , they will above all else. They do not see , do not feel that they are badly dressed , they have no clothes, they are hungry, they are sick - they just do not see ", - said the center's director of social services " Kindness "Svetlana Efanova .
By Intigam Mamedov and his neighbors in the collector on Saturday , November 9 , come Belogorskogo shelter workers "Hope ." They offer shelter to the homeless , at least temporarily freezing . In the summer of vagrants tend to will and often return to the street.
Also waiting in the Belogorskyi homeless shelter "Hope" at the church "New Generation ." At present they have 80 people. In addition, there are 30 people in the branch of a shelter in Serishevski area. In two offices, " Hope " will be able to accommodate an additional 150 people. In the village of Ushumun Magdagachinsky district operates a state institution "Center of social adaptation for persons of no fixed abode " , designed for 100 seats. All of them tend to be busy .
Comments
Login, to comment
Related news 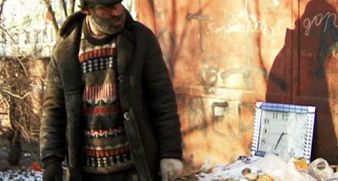 Winter will be long: the Amur homeless looking for where to survive the cold
Твитнуть